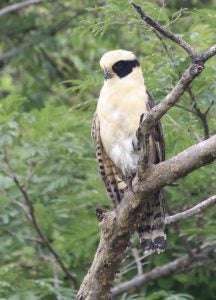 Whether agriculture can continue to support biodiversity as the climate changes is less clear. To understand how land-use and climate change are shaping communities, we established a study system in Costa Rica consisting of independent gradients in regional climate, forest cover, and local land use. Across 150 sites in nature reserves, farms, and privately-owned forest patches, we mapped forest cover, surveyed vegetation, and counted birds for five years. We found diverse bird communities can be found on farms, but species responses to agriculture are species-specific and nonlinear. Despite this complexity, clear patterns emerged. For example, vulnerable species were rare in agriculture, but thrived in privately-owned forests (even though these forests were fragmented and disturbed). In contrast, widespread, dry-adapted species dominated farms. As a result, our models predicted forest species would lose ~60% of their ranges to climate change by 2070 whereas agricultural species would lose <30%. Fortunately, prioritizing restoration in wetter, more forested regions may mitigate the interactive effects of land-use and climate change on tropical birds. Forests on private lands may also support species that benefit people. For example, after administering a survey to >400 local people, we found species associated with forests were considered most important to conserve for future generations, most representative of local identities, and most beautiful.

Looking forward, we have expanded these lines of inquiry into similar landscapes in Ecuador and the U.S. (including sites near Davis) to answer several remaining questions. First, does detecting species in agriculture mean it is good habitat? By surveying bird behavior and nesting success along land-use gradients, we are assessing whether agriculture represents a viable place for species to complete their lifecycles or an ecological trap. 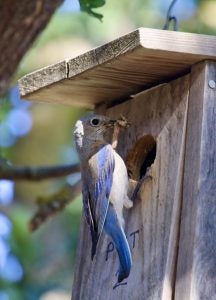 Second, what mechanisms underlie bird responses to land-use and climate change? We are exploring how global change affects bird physiology, movements, and fitness. To do so, we are using citizen databases, long-term nest box monitoring programs, and GPS loggers. For example, analyses of a community-science database suggest bird nesting success plummets in agriculture when temperatures spike during nesting (N= >150,000 bird nesting attempts). Yet no such effects occur in forests, indicating direct physiological effects of temperature spikes may, in part, mediate species responses to farming.

Theme by Anders Noren — Up ↑